Dramalj and the Crikvenica Riviera 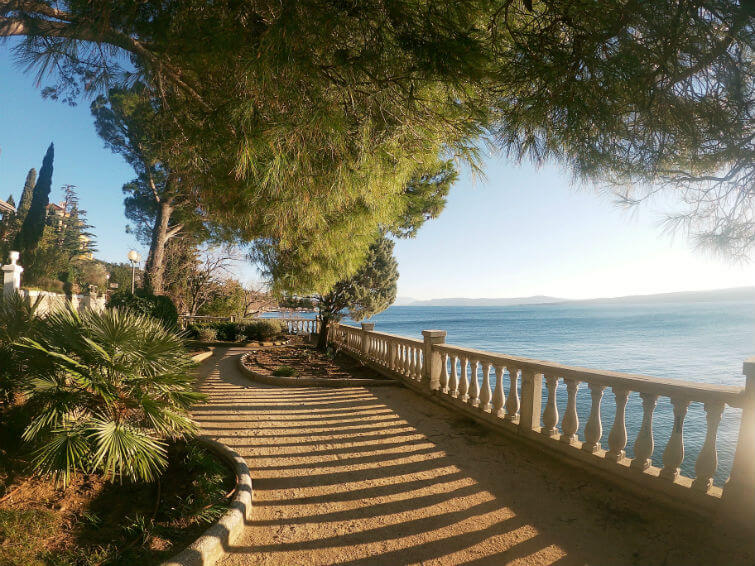 Dramalj is a village north of Crikvenica, to which it belongs administratively. Its patron saint is Saint Helen, virgin and martyr.

Dramalj is a tourist destination connected to Crikvenica by a promenade along the sea, and it extends to the Kačjak peninsula.

The town was established by the inhabitants of the Vinodol Valley as a natural exit to the sea, and began to develop more extensively at the end of the 19th century, following the tourist development of the neighbouring Town of Crikvenica.

Dramalj has several well-tended beaches equipped with various facilities, some of which are the winners of the best-maintained beaches award, as well as a range of venues for entertainment and cultural events, such as the Summer Carnival.

On the Kačjak peninsula, there is a tourist resort with bungalows, a sports and recreational center, a restaurant with a terrace overlooking the Island of Krk and a small camp.

Dramalj boasts sports and recreational facilities on the beaches and the Kačjak peninsula.

A series of natural small bays where the sea meets the rich Mediterranean vegetation make Dramalj an ideal place to relax for all nature lovers.

The favorable location and shelter from strong winds – the slopes of the Kapela Mountain in the north, and the Island of Krk in the south – have a great effect on the coastal and continental climate change in this region.

The mild and steady climate of the Mediterranean with a high number of sunny days prevail, with the simultaneous presence of coastal and mountain air currents, dry, clear and warm summers, and cloudy, rainy and relatively mild winters with a healthy, locally-conditioned wind system.

The average temperature in the winter months is around 9 ° C and in the summer around 23 ° C. Snow, fog and temperatures below 5 ° C are rare.

The sea air is characterized by its purity and is dispersed with healthy oligo-minerals, while very low concentrations of harmful pollen allergens and waste gases have been recorded.

The air quality enhances the high percentage of ozone, chlorine, sodium, and iodine, while the sea salinity of 4% and the uninterrupted airflow from southeast to northwest make the sea clean and clear.

The town consists of 4 settlements: Crikvenica, Dramalj, Jadranovo, and Selce.

The Town of Crikvenica is located in the Kvarner Bay of the Adriatic Sea, and it is part of the Primorje-Gorski Kotar County, whose center, the City of Rijeka, is thirty kilometers away.

The whole town of Crikvenica is actually a riviera with a series of urban and closely connected tourist destinations: Selce, Crikvenica, Dramalj and Jadranovo. It spans about thirty square kilometers on land and in the Aqueduct of the Vinodol Channel.

Its excellent port position and good traffic connections are just some of the prerequisites for fostering the centuries-old tourist tradition of the Crikvenica Riviera, which is at the fingertips of visitors from Central Europe and the Alpine Region and can be reached by road in one day from almost all parts of Europe. It can also be reached by boat or plane.

Sailors will find a dock for their vessels in the City Harbour or in one of the smaller ports, while the nearby Marina in Punat on the Island of Krk provides winter services.

Rijeka Airport is located on the Island of Krk, which is only 20 km away from Crikvenica.

The Crikvenica coast offers plenty of interesting amenities, and lovers of active holidays, as well as those who are looking for a relaxing holiday, are welcome.

Equally appealing is the Crikvenica hinterland and the Vinodol Valley where you can explore nature, go for excursions and get to know the customs and traditions of this historical Croatian region.

Read more about Dramalj and the Crikvenica Riviera in our articles:

We have dedicated our time to decorating the apartments so that our guests can enjoy a pleasant stay, happy moments and nice memories of their holidays at Apartments Vladimira *** Dramalj. Beautiful beaches, a Mediterranean climate, and the vicinity to the sea, surely won’t leave you indifferent.

Visit us and see for yourself!

We use cookies to ensure that we give you the best experience on our website. If you continue to use this site we will assume that you are happy with it.Ok